How Is Child Custody Determined in Utah? 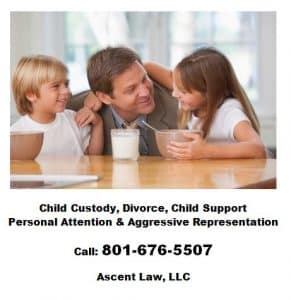 How Is Child Custody Determined in Utah?

Some of the biggest concerns for people filing for divorce have to do with custody of the children. This can get messy when each parent has a different desire for what happens to the children. However, the court’s priority when determining custody is what is best for the child, regardless of whatever else happens in the divorce proceedings. I’ve previously discussed this here.

What goes into consideration when deciding custody?

A family court judge or court commissioner will hear the case as each side presents evidence to their case for being the best suited caretaker for the child.

“General factors for determining the best interests of a child if the parents dispute custody:

The judge may ask a child who the child wants to live with, but the desires of a child—regardless of age—are not controlling, and the court may determine custody contrary to the child’s desires.
In determining whether the best interest of a child will be served by ordering joint legal or physical custody, the court may consider the following factors:

I’ve also outlined an overview of family law and divorce in an interview that you should find helpful.

What happens after custody is determined?

According to law, the parents must abide by the court’s decision, whatever it may be. Parent time and child support may not be withheld if the court has demanded it be given. Violation of the court orders can result in judgement, fines, and even jail time.

Custody orders may be modified, but only through petitioning the court, and only if there have been significant changes in the circumstances that change what the best interests of the child would be.

For more information on child custody and divorce law, a free initial consultation is your next best step. Get the information and legal answers you’re seeking by calling (801) 676-5506 today.

How to Modify Child Custody

How is Child Custody Determined as a Part of Divorce”