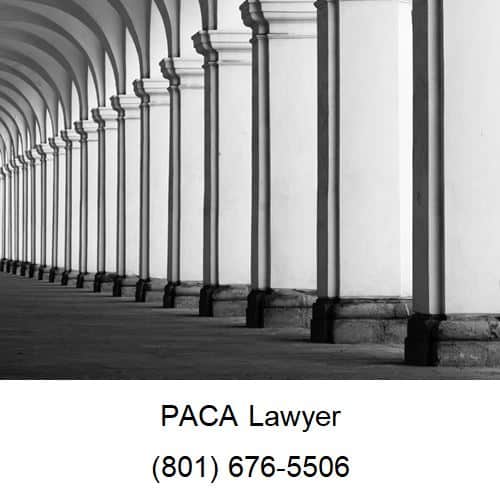 The PACA reparations process has a very short period during which a complaint must be filed, nine months after the claim arose, if you wish to seek payment from the other party or an audit of its records of your transactions with that party! If the Informal Complaint is filed after the end of this nine month period, generally 9 months after the payment was due or nine months after the goods were shipped, then the USDA will dismiss the informal complaint.  The nine month filing period is one of the major differences between the filing of a PACA complaint with the USDA PACA branch and filing suit in federal court to protect your rights under PACA.  Generally, the period to file a suit in the federal courts is at least four years after the claim arose, a far longer period than the nine month filing period for claims that are filed with the USDA PACA branch.

When the Informal Complaint is filed, the USDA will send a copy of the Informal Complaint to the Respondent and request that the respondent describe what it believed happened.  The USDA may attempt to resolve the Informal Complaint through mediation with both parties present at a USDA office.  In addition, in the case of consignment transactions between a complainant and respondent, the USDA may, but is not required to, conduct an audit of the records of a party that received product on consignment.  The USDA may, but is not required to, issue a Report of Investigation and make findings that can be used in the Formal Complaint stage and if the USDA conducts an audit, it may report what it believes is owed by either the complainant or the respondent to the other.  During this time, the USDA may offer the parties the chance to mediate their disputes before the USDA. In our view, having a PACA Lawyer on your side to help in negotiations and resolving these disputes is essential to your success.

FORMAL COMPLAINTS BEFORE THE USDA

Finally each party is given an opportunity to file a brief regarding the legal points and issues related to the matter between them.  Once all the briefs are filed, or if one or both parties decide to not file a brief, the matter is submitted to an administrative law judge who will decide the case and issue an order.

PACA REPARATIONS WITH A HEARING

If either the claim by the complainant or a counterclaim by a respondent are for more than $30,000 both parties have the option to have the controversy between them decided by an oral hearing before a hearing officer, instead of resolving their dispute solely by sending documents to the USDA. The USDA has special rules for these proceedings, and it is possible to request depositions of witnesses and it is possible to obtain documents from the other party or third parties. The process concludes with an oral hearing before a hearing officer. Parties may ask the USDA to issue subpoenas of witnesses to appear at the place of the hearing and give their testimony at the hearing. The hearing officer hears the testimony, exhibits are offered into evidence, the parties or their counsel can make arguments and the entire matter is then submitted to an administrative law judge who will issue a final order.  The hearing officer hears the case, but the hearing officer does not sign the formal decision.  If the decision of the administrative law judge orders one party to pay the other, the order is known as a “reparations order.”

Enforcing a PACA reparations order – Whether the parties have proceeded without a hearing on the PACA claim or with a hearing the administrative law judge will issue an order.  Either party may request reconsideration of the order.  If the order is a reparations order which requires either the complainant to pay the respondent or the respondent to pay the complainant, (for example as the result of a counterclaim) the order itself does not force the losing party to pay the winning party.   Enforcement of a money award against a party will be suspended if the party files an appeal. There are two kinds of enforcement of a monetary award by the PACA branch, license suspension by the USDA and the filing of an enforcement action before the United States District Court where the losing party is located.  But a party which has won a reparations award against a party needs to know that the fact that it has an award does not automatically mean that it will get paid.  If no appeal has been filed and no appeal bond has been posted, the party which won a reparations award may file suit in United States District Court to enforce its award.   The enforcement action is filed normally in the United States District Court where the losing party is located.  The party files suit to enforce the award and a copy of the suit must be served upon the losing party.  If no appeal was filed as required by PACA, the enforcement is a relatively quick proceeding, which results in a judgment as well as attorney’s fees for the enforcement action.

If a party against whom a reparations award does not appeal the award and does not pay the award within 30 days of the date on which the award becomes final, the USDA will automatically suspend the PACA license.  If the PACA license is suspended, the person or entity whose license is suspended may not legally trade in produce in the United States. Furthermore the USDA may file actions to bar those persons affiliated with the suspended licensee (called “responsibly connected persons”) from working in the US produce industry for one to two years.  If another PACA licensee hires one of these responsibly connected persons within the first year after that person’s right to work in the produce industry has been suspended, it risks losing its own PACA license.

If after one year, but before two years have passed since the USDA issues an order against an responsibly connected person, that person may only work in the produce industry if he or she (or his or her employer) post a bond with the USDA to cover any losses by any produce trader that deals with them or the entity with which they are affiliate.  Keep in mind that the USDA has limited resources and it cannot always dedicate the resources to seek court orders against responsibly connected persons who simply go out and open another unlicensed produce business.  If a produce trader is not familiar with a prospective buyer, seller, broker or consignee, it is a good idea to check the USDA PACA section of the USDA website and see if anyone affiliated with the other party to a transaction has a disciplinary order outstanding against himself.

If an award is issued against a party to a PACA reparations proceeding that requires payment of a specific amount that party may appeal if it complies with the requirements for PACA appeals. There are time limitations for filing such appeals, but the most important requirement is that the party against which a PACA reparations award was issued must deposit a bond with the USDA for twice the amount of the reparations award.  This bond can either be in cash or in the form of a surety bond from a surety recognized by the United States Department of the Treasury.