Utah probate law can be complicated. When you live in Salt Lake County, you should speak with a lawyer when it comes to probate administration or a will contest.

Your will has to be probated before the beneficiaries of your will get the share you have bequeathed them. Speak to an experienced Salt Lake Utah probate lawyer before you make your will. If a person passes away without making a will, then his estate will be distributed according to Utah intestate laws. Every will has to go through probate before the beneficiaries get their share. Probate is the legal process by which a court validates the will. If your close relative has passed away living behind a will, contact an experienced Salt Lake Utah probate lawyer. It’s important that the will is probated. For this you must file an application in the probate court and pay the probate fee.

Under Utah law, each child has a right to a share of your estate. The terminology applied to the nonmarital child through history reflects the increasing generosity of the law toward the child. The bastard of the early common law gradually became the illegitimate child, a term used in state laws during most of the twentieth century.

While “illegitimate child” is less jarring than bastard, it is both stigmatizing and imprecise; regardless of one’s views about sexual relationships outside of marriage, the child herself has done nothing improper. Recognizing that it is unfair to brand an innocent child as illegitimate, commentators in the last quarter of the twentieth century began to refer instead to the child born out of wedlock—an improvement over “illegitimate,” but certainly a mouthful. Today commentators increasingly use the less cumbersome term nonmarital child. The term is simple, accurate, and entirely nonjudgmental. Statutes in many states now use the modern term, but “illegitimate” remains on the books in some states.
Because the nonmarital birthrate in the United States remained low until the final decades of the twentieth century, relatively few children suffered the brunt of older statutes that precluded the nonmarital child from inheriting from and through her father. Shortly before the sexual revolution of the 1960s and 1970s, only one in twenty children was nonmarital. By contrast, today almost one in three births in the United States occurs outside marriage, and in some parts of the country more than half of annual births are to unwed mothers. The stigma once following the mother and her nonmarital child has largely disappeared. In fact, increasing numbers of women embrace the opportunity to give birth outside of marriage. Importantly for the probate system, the heirship claims of the millions of nonmarital children born since the late 1960s will begin to ripen in large waves during the twenty-first century as their fathers die.
Unless legislators address the inheritance concerns of these nonmarital children, probate courts can expect to see more and more paternity/heirship claims. Such claims are likely to impair prompt, orderly, and efficient estate administration and increase the number of seemingly ad hoc, inconsistent court rulings—problems that statutory guidance could prevent or reduce. If you are a nonmartial child seeking a share in the estate of your deceased father, speak to an experienced Salt Lake Utah probate law. You can challenge the will if you have been disinherited.

In 1968 the U.S. Supreme Court decided the first in a long series of cases involving state discrimination against nonmarital children. The timing of the case is not surprising; as the nonmarital birthrate began its rise in the late 1960s, it was inevitable that an “illegitimate” child (or someone on her behalf) would challenge state laws that denied her the benefits received by her “legitimate” counterpart. Among those challenges were three cases in which a nonmarital child sought to inherit from her intestate father’s estate.

In 1977 the Supreme Court decided Trimble v. Gordon, the landmark case whose facts are outlined at the beginning of this book. Even in 1977 states still commonly placed substantial hurdles in the path of the nonmarital child seeking to inherit from her intestate father. In Trimble, the decedent Sherman was a homicide victim. His daughter, Deta Mona, claimed to be an heir of his intestate estate, which consisted of a vehicle worth about $2,500. Although Sherman had never married Deta Mona’s mother, no one disputed that Sherman was Deta Mona’s father. In fact, during Sherman’s lifetime a circuit court had entered a paternity order against him requiring him to pay child support. At the time of Sherman’s death, however, Illinois probate law recognized a nonmarital child as an heir from and through her deceased mother only; state law did not recognize a child such as Deta Mona as an heir from and through her deceased father if the child’s parents had not married each other. Under the statute, therefore, Deta Mona received nothing— despite the paternity order and Sherman’s open acknowledgment of Deta Mona as his child during his lifetime. Under existing law, Sherman’s heirs were his parents and siblings. Had Deta Mona been a marital child, she would have been Sherman’s sole heir under the Illinois statute and thus the recipient of the vehicle. Deta Mona and her mother unsuccessfully challenged the constitutionality of the statute in the Illinois state courts.

Ultimately, however, the Supreme Court ruled in Deta Mona’s favor. The Court concluded that, rather than simply rubber-stamping state laws concerning illegitimate children, courts should engage in a more searching inquiry—one that is now called intermediate scrutiny. Illinois had asserted that its statute furthered the state interest in promoting “legitimate” family relationships. The Court found, however, that the statute bore only a “most attenuated relationship” to that goal. The Court easily rejected the notion that adults will refrain from “illicit” or nonmarital relationships if the state imposes an inheritance penalty upon their children. The Trimble opinion meant that state probate codes could no longer attempt to promote “legitimate” family life by punishing nonmarital children for the perceived sins of their parents.

Paternity Claims against the Estate of the Putative Father

If the man died with a will that does not specifically provide for the child, in some instances the child may still obtain part of the estate through class gifts or as a pretermitted heir. Even if a child who successfully asserts paternity takes no assets directly from the estate, the paternity determination can still be important in enabling the child to claim various benefits as a child of the decedent— things like Social Security payments based on the decedent’s earnings record and inheritance rights from other relatives of the decedent. Speak to an experienced Salt Lake Utah probate lawyer to know how you can make a claim. Merely making a claim will not suffice. You must back your claim with proper evidence.
The difficulties of establishing paternity often increase when the child first brings the claim after the death of the putative father. If the child has a presumed father other than the decedent, the child will probably have to rebut that presumption to demonstrate that she is the decedent’s nonmarital child.

If state law precluded the putative father from establishing paternity of the child, the decedent’s “legitimate” family may claim that the law should similarly preclude the child from establishing paternity at the decedent’s death. The decedent’s legitimate family may also attempt to avoid the paternity claim by promptly administering or divvying up the estate, thereby hoping to foil the nonmarital child’s attempt to develop her case. Moreover, courts may have little sympathy for a nonmarital child who appears to have intentionally and unreasonably waited to assert her claim until the putative father’s death, or who has previously inherited from a nonbiological (but presumed) father. Evidentiary rules may also severely restrict testimony that the child can put forth against the decedent and his estate. And, of course, the decedent may have taken to the grave much of the evidence that he alone could have provided on the paternity question.

In some respects, however, nonmarital children are similar to potential creditors of the estate. Published notice of estate proceedings to creditors is often also made binding against nonmarital children when the estate administrator acts in good faith and is unaware of the existence of such children. Like other creditors, the nonmarital child must file her claim against the estate within the period prescribed by Utah law. If you are seeking your rightful share in the estate of a deceased parent, contact an experienced Salt Lake Utah probate lawyer. The lawyer can help you get your rightful share and prevent it from going into the wrong hands.
Adopted Children

And what if the child adopted into a new family dies intestate? Not surprisingly, intestacy statutes typically exclude biological parents from sharing in the child’s intestate estate. Intestacy statutes also typically provide no heirship rights for other pre-adoption relatives of the child. In contrast, the child’s adoptive parents are potential heirs. Moreover, the adoptive parents’ relatives are also likely to be potential heirs of the child under intestacy statutes. This would include siblings in the adoptive family or the adoptive grandparents, among others.
Traditional intestacy laws include a child born after his father’s death. These so-called afterborn- or posthumous-child statutes were designed to treat a child conceived through sexual intercourse but born after the father’s death the same as the father’s children conceived through sexual intercourse and born during his life. When promulgated, the statutes did not anticipate the possibility that one day a child could be conceived after—potentially long after—the death of her genetic parent.

When you need legal help with a probate case or estate administration in Salt Lake City Utah, please call Ascent Law LLC (801) 676-5506 for your Free Consultation. We can help you with Estate Planning. Last Wills and Testaments. Living Trusts. Trustee Succession. Guardianship. Conservatorship. Probate. Powers of Attorney. Health Care Directives. Estate Disputes. And much more. We want to help you.

What Constitutes A Legal Will In Utah?

What Is The Average Amount Of Alimony? 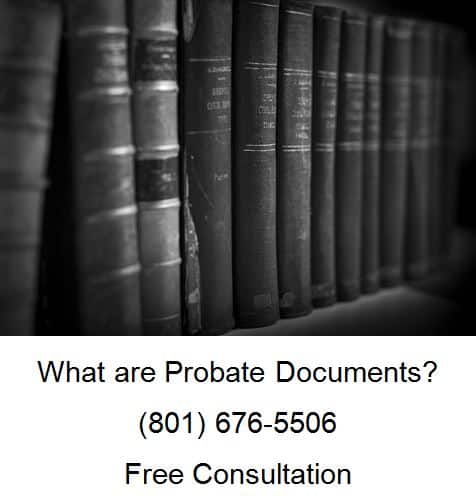 Probate documents cover the entire process of administration of estates, including those with or without wills and with or without direct court supervision. Probate is a general term for the entire process of administration of estate of dead persons, including those without wills, with court supervision. The initial step in the process is proving a will is valid and then administering the estate of the deceased person according to the express terms of the will.

The typical documents in a probate include a petition for probate, a statement or order appointing a personal representative. Either letters testamentary or letters of administration. An inventory of the estate and finally closing documents which include a final report and accounting and either a notice of closing of the estate or a court order closing the estate.

If you are here, you probably have an estate or probate issue you need help with, call Ascent Law for your free consultation (801) 676-5506. We want to help you.

What is Estate Planning?

What Happens if you pass away without an Estate Plan?

Basic items in an Estate Plan