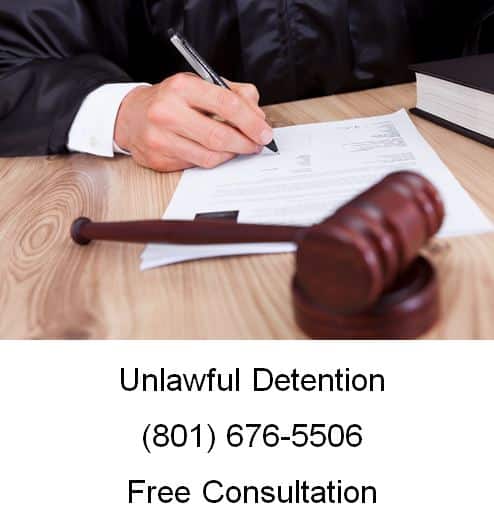 Unlawful detention, also known as false imprisonment in some places, under Utah law is defined as a person, without legal authority, restraining or detaining an individual against his or her will.

While the definition seems clear at first glance, what constitutes “detention” might surprise most people. For the purposes of § 76-5-304, restraint could be something as simple as grabbing a person’s arm or preventing him or her from leaving a room.

Unlawful detention is often confused with kidnapping in Utah. Those crimes, however, are distinctly different. Moreover, the Unlawful Detention Statute states that a violation of § 76-5-304 is separate and the circumstances surrounding it should not constitute a violation of kidnapping, found in § 76-5-301.

Information on Unlawful Detention in Utah

To convict an individual of unlawful detention in violation of § 76-5-304, the State must prove the following elements beyond a reasonable doubt:

Elements of Unlawful Detention of Minor

Under § 76-5-304 of the Utah Criminal Code, an individual may also be convicted of the unlawful detention of minor, if the prosecutor proves the following elements beyond a reasonable doubt:

Utah law defines “against the will of the victim” in the context of the unlawful detention of a minor as acting without the consent of the legal guardian or custodian.

Moreover, for the purposes of this Statute, a victim that qualifies under § 76-5-301(2) is any of the following;

Penalties for a Unlawful Detention Conviction

In Utah, the unlawful detention of a person or minor is classified as a Class B misdemeanor. Under Utah law, class B misdemeanors are punishable by up to six (6) months in jail and up to $1,000 fines.

There are multiple types of claims, both civil and criminal that are very similar to unlawful detention.

– § 76-6-604 – involves a law enforcement officer or authorized retailer detaining a person against his or her will under the belief of some wrongdoing. Wrongful arrest under Utah law may subject a person to civil liability.

Attorneys for DUI Defense in Utah

Can I get My Chapter 13 Payment Plan Lowered?