This is a Card That Our Office Received In The Mail On June 4, 2020 From One Of Our Clients. Names have been redacted for privacy purposes.

This is a 5 Star Review That Our Office Received On Facebook.

This Thank You Card was received by our office on April 8, 2019. 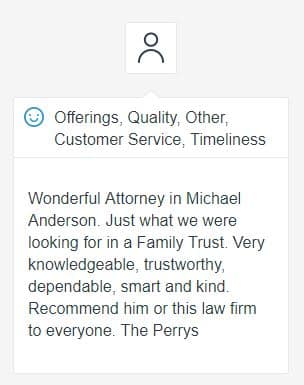 “My experience was unlike all of the stories one hears of attorneys. Mike and his team were absolutely spot on with their communication, follow-up, understanding and ultimately the results. They were aware of my budget and worked hard to keep me there.

I am truly appreciative of there complete caring and handling of my situation.”
– A Satisfied Client

“As far as I am concerned attorney Mike is the top family law lawyer in all of Utah — Prior to hiring Mike, I was involved in a four year divorce battle in Salt Lake City, Utah. My now ex-husband had filed for divorce and tried to take virtually all the marital property as his own. He was stationed in the military and I was living out of state.

Anyway, I had gone through two other attorneys in Salt Lake and some located in other cities in Utah. I had nothing but problems with them. They wouldn’t move the case forward. They wouldn’t get me copies of documents. They wouldn’t call me back. There are both good and bad lawyers out there and I can’t say enough about Mike. He is kind, understanding and I could tell he wanted to help me. I had to get my mom to help pay for him, but it was worth every penny. These other attorneys would miss deadlines on filing documents, and basically not keep me informed about what was going on.

Long story short, I was referred to Mike. Holy Smokes!! A God send! First, I spoke with his staff (both Karen and Lea were great); then when I spoke with Mike, he listened to all my fears and problems with other lawyers. Mike or his staff always called me back and documents were given to me when I needed them. He explained how the process worked and told me what to expect. The best part was that he is amazing in court – he is confident and speaks clearly. He’s not afraid to argue aggressively and you could tell he’s been in court before. It spite of my ex-husband and his dumb attorney’s efforts to drag everything out as long as possible, Mike came on board and what was four years was concluded in 6 months once I got him on board. Being out of state was hard too, but this guy knows what he’s doing. Don’t waste your time with other lawyers. Give Mike a call. I can’t thank him enough.”

“Our experience with Ascent Law has been wonderful. They have helped us with several rental property issues, and their advice has been spot on every time. I can highly recommend them.”
– Muddy B.
“My wife and I started using Michael Anderson about ten years ago. Our newborn daughter had some medical issues (some due to malpractice) and he helped us protect our credit and get some of the charges removed. We have used him several times since and have recommended him to friends and family.”
– Jared T.
“He sido representado por los abogados Ascent Law. Los dos son muy buenos. Ellos me audaron con el caso de real state. Me gusta como saben de las leyes y siempre quieren auydarme. No me juzgaron tampoco. El costo fue de $200 por mes por unos 5 meses y fue todo. Los recomendo.”
– Maria F.
“I have worked with other attorneys before, and I can tell you that Ascent Law really cares about their clients. They think in ways other attorneys don’t. They give you all the options they can think of and then help you implement them to protect your wealth.”
– J.M.